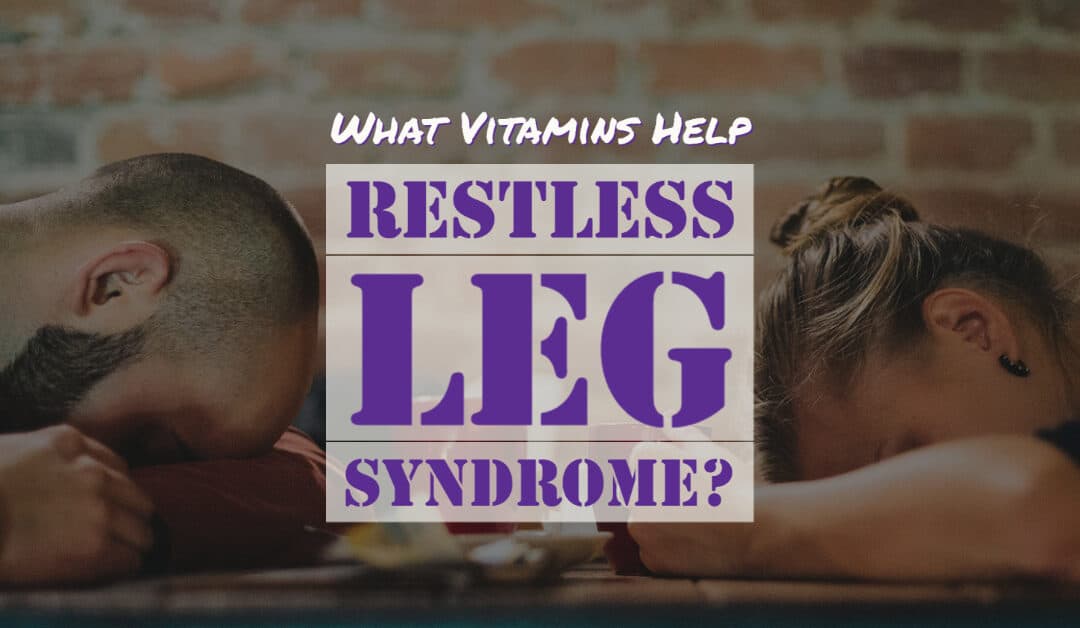 According to the National Sleep Foundation, around 10 percent of individuals experience Restless Legs Syndrome at times. 1 in 500 reports that the condition is chronic and interferes with their quality of life, work productivity, and mental health. If you suffer from uneasy feelings in your legs that keep you up at night, you may wonder what vitamins might help restless leg syndrome. Let’s look at what RLS is and what you can do about your suffering.

What is Restless Leg Syndrome? (RLS)

“People with severe RLS describe symptoms of the condition as an overwhelming urge to move their legs when they are at rest. They may feel pain, or the sensation of soda bubbles in their veins or worms crawling in their legs, with relief coming only when standing or deliberately moving their legs.” (2)

The National Institute of Neurological Disorders and Stroke classifies RLS as “a sleep disorder since the symptoms are triggered by resting and attempting to sleep, and as a movement disorder, since people are forced to move their legs in order to relieve symptoms.  It is, however, best characterized as a neurological sensory disorder with symptoms that are produced from within the brain itself.” (3)

RLS is a highly heritable disorder, with a 35-40% relative risk of inherency. So if you struggle with needing to move your legs when it’s time to sleep, your children may also be at risk of inheriting the same problem as they age.

“RLS affects approximately 5–10% of European and North American adults with about 2–3% experiencing moderate to severe symptoms. However, they indicate a lower prevalence of the disease in Africa and Asia and among Hispanics. The overall pediatric prevalence is 2–4% in the United States. Based on a population-based survey, the prevalence of RLS was 3% between ages 18 and 29, 10% between ages 30 and 79 and 19% in people older than 80 years of age. The mean age of onset is during the third or the fourth decade.” (4)

Especially if you live in colder climates, it is easy to experience a Vitamin D deficiency without enough sun. According to Healthline, “Vitamin D is an extremely important vitamin that has many important functions throughout your body. Unlike other vitamins, vitamin D functions like a hormone. Many cells in your body have a receptor for it. Your body makes it from cholesterol when your skin is exposed to sunlight. It’s also found in certain foods such as fatty fish and fortified dairy products, though it’s very difficult to get enough from your diet alone.” (5)

Adults should aim to get 1,500–2,000 IUs of vitamin D daily. Foods that contain large amounts of Vitamin D include:

Studies show that “vitamin D supplementation improves the severity of RLS symptoms and advocates that vitamin D deficiency is conceivably associated with RLS.” (6)

Foods high in Vitamin E include:

Foods High in Vitamin C include:

You may want to consider eating more red meat (with citrus for better absorption) if you experience symptoms of iron-deficiency anemia such as:

Avoid Excitatory Food Additives such as MSG or Aspartame

In “Excitotoxins: The Taste that Kills,” Russell Blaylock, MD, explains that excitotoxins include: MSG, aspartate, and cysteine. “Hereditary plays a role in controlling enzymes that either generate energy for the neuron or protect it from dangerous accumulations of free radicals or excitotoxins.” (10)

According to Hopkins Medicine, “Glutamate may be equally important in causing some of the symptoms experienced by RLS patients.”

Dopaminergic medications have been the mainstay treatment of RLS, also known as Willis-Ekbom disease. Some of the medications used to treat RLS in the past and now include:

Standard treatments include medications that behave like the neurotransmitter dopamine, opioids and anti-seizure drugs. New directions for treatment may include using electrical or magnetic pulses to calm or interrupt the neurological hyperarousal of the brain. (12)

If you struggle to rest at night because of the creepy crawlies in your legs, there is hope. Trying to eat healthily and exercise are good starting points, but if your restless leg syndrome remains a problem, make an appointment with our sleep study clinic. Our sleep specialists focus on conditions in the brain that make sleep irregular or impossible. We find the solutions you need to get a good night’s sleep again. Get in touch today and find out how our board-certified ENT sleep specialists can help you feel like yourself again.