Can You Hear While Sleeping? 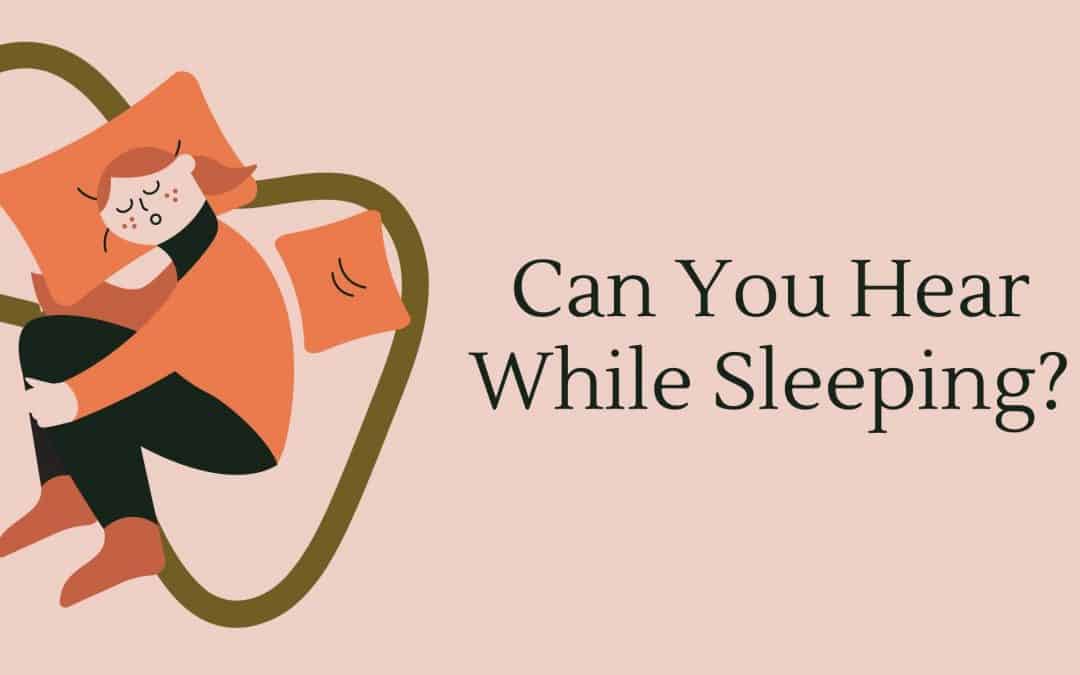 Sleep is not a uniform duration of rest; rather, it consists of sleep cycles. A sleep cycle is made up of four stages that we experience every night during sleep. People go through several sleep cycles in one night (typically 4-6) which consist of the following stages:

–  Stage 1: is the first 1 to 5 minutes of falling asleep. This is the dozing off stage where the body starts to relax and the brain starts to slow down. One is not completely asleep so it is easy to awaken. But if there are no disruptions, it is easy to move on to stage 2.

–  Stage 2: during the first sleep cycle of the night, stage 2 can last for 10-25 minutes and becomes longer over the following sleep cycles. According to the Sleep Foundation, a person usually spends half of their sleep in this stage. The body and brain enter a deeper state of relaxation: there is also a reduction in temperature, heart rate and breathing are slowed, eye movements stop. Additionally, there are shorter periods of brain activity but it is difficult to wake up during this stage.

–  Stage 3: this phase is the deep sleep stage where the body becomes deeply relaxed: muscles, heart rate, and breathing decrease. Though brain activity is reduced, this deep sleep facilitates restoration which supports brain health. During early sleep cycles, this stage can last 20-40 minutes and get progressively shorter as the night continues.

–  Stage 4:  the last stage of the sleep cycle is REM sleep. Brain activity increases, nearing the same levels as when one is fully awake. Simultaneously, the body remains in a deep state of relaxations except for the eyes and breathing muscles. This stage is also characterized by rapid eye movements (REM). This stage gets longer over the course of the night and is typically the stage where people experience dreams.

All of these stages do not last the same length of time but on average, are nearly 90 minutes. Sleep stages are critical because they allow the body to recuperate in ways that are essential for cognitive functions, emotional and physical health, and energy needed to sustain the body. These sleep stages are also important to understand as we look at hearing while sleeping.

A recent 2019 study, published in the Human Nature Behavior Journal, examined what happened when people were exposed to external sounds while sleeping. Researchers replicated what’s called the “cocktail party problem” which essentially refers to hearing many voices at once but selectively choosing which voice you are focusing on. This ability is what allows people to be in noisier settings and hold a conversation with one person while not listening to everything else happening in the environment.

They did this by playing two voices (one in each ear) while participants slept. One voice was clearly articulating full sentences and phrases while the other was speaking a kind of gibberish that was incoherent. While participants were exposed to these sounds, researchers monitored brain activity through EEG recordings. Researchers found that the brain was paying attention to the sounds that were clearly communicated “as if the brain was turning its internal volume up for this particular speaker,” Thomas Andrillon, lead author of the study said. Participants paid more attention to these cohesive sentences over the gibberish sounds played in the other ear.

So what exactly does this mean? This study reveals that the brain responds to external sounds, meaning that you can hear while you sleep.  This also aligns with the stages of sleep where the brain is more active during certain phases over others. Hearing while you sleep though does not necessarily mean that you will remember the sounds or sentences that you have heard. Similar to dreaming, you do not always remember your dreams the next day. Not remembering, however, does not mean that they did not happen.

At Enticare, we offer both hearing and sleep services! If you experience difficulties with either, we’re here to help. Contact us today to learn more.