Why Does My Nose Run When I Exercise? 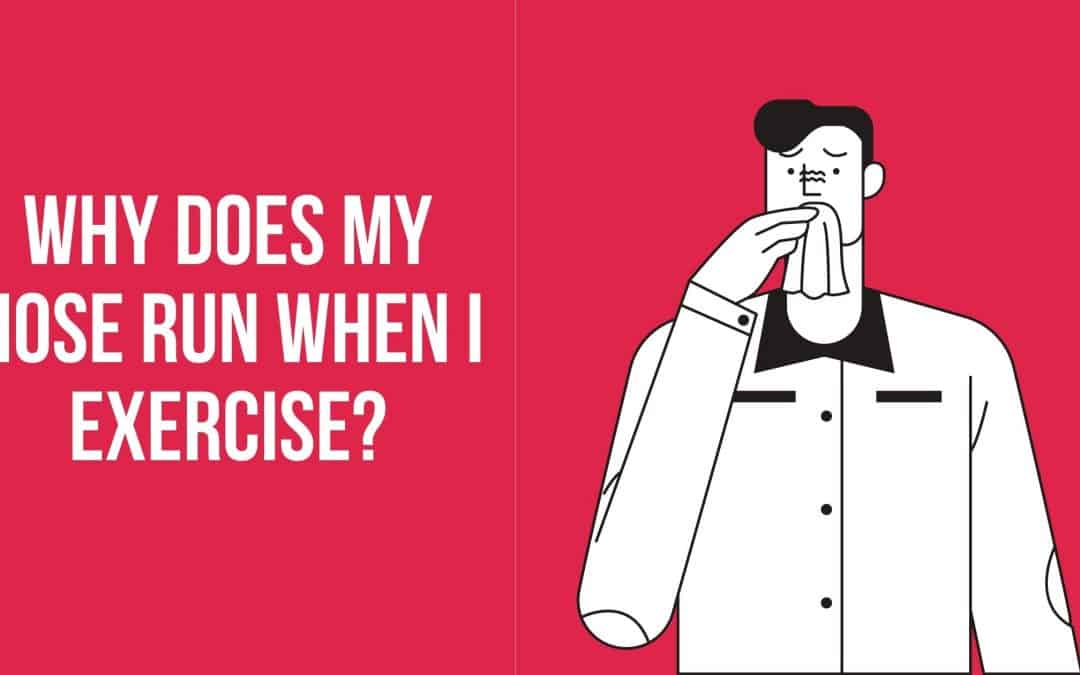 Experiencing a runny nose while exercising is more common than you think. Typically, in this context, what causes a nose to run is the inflammation of the walls that line the nose. This swelling for the mucus membrane can produce a range of effects including a runny nose, watery eyes, congestion etc. This is referred to as rhinitis which is most commonly caused by seasonal allergies.

According to the Asthma and Allergy Foundation of America, more than 50 million people experience various types of allergies every year. Exercising, especially outdoors, can trigger rhinitis and its associated symptoms. This can occur with greater frequency during Spring and Summer months when seasonal allergies are at an all-time high. There are useful ways you can manage a runny nose and other symptoms you may experience which can lead to a much more pleasant time exercising!

There are two types of rhinitis: allergic or non-allergic which have different causes.

Allergic rhinitis,  also known as hay fever, is the more common type of rhinitis. It is caused by how the body’s immune system responds to certain environmental factors. When the immune system comes into contact with a specific substance (or allergen) that it recognizes as harmful, it activates a response that produces an allergic reaction. There are different ways people can encounter an allergen: breathing it in, ingesting, touching etc. To destabilize the allergen and the harm it can cause, the immune system releases antibodies that neutralize it. These antibodies are then activated every time the immune system experiences the allergen and this releases chemicals like histamine into the bloodstream. This process causes the allergic reaction and the symptoms associated with it. The most common substance that people are allergic to is pollen which is a powder like substance that is made from plants to fertilize other plants. Other common allergens include pet dander, mold, and fungi.

Non-allergic rhinitis is not as easy to identify and diagnose. Not as common, it accounts for nearly one fourth of all cases of rhinitis. It does not involve the body’s immune system but is caused by the blood vessels being affected by various factors that produce congestion. These triggers of non-allergic rhinitis include chemicals with strong odors (detergents, perfumes), air pollution, changes in weather, tobacco etc. Non-allergic rhinitis can also be triggered by viral infections.

Allergic and non-allergic rhinitis do share similar symptoms: runny nose, congestion, post-nasal drip etc. Exercise can trigger both kinds of rhinitis in a variety of ways.

Exercise can activate both allergic and non-allergic rhinitis, causing one’s nose to run. Studies have shown that there are links between exercise and rhinitis, specifically highlighting that rhinitis tends to be more prevalent among athletes compared to non-athletes. Exercise is a common and significant way that people experience greater exposure to allergens. This exposure can manifest in numerous ways including:

–          while running or engaging in other forms of exercise outdoors, people can breathe in pollen (allergic rhinitis) consistently and/or be exposed to environmental pollution (non-allergic rhinitis)

Exercise can increase exposure but there are useful ways to manage symptoms that minimize the impact!

There are various strategies you can use to treat your runny nose and other symptoms you may experience. This includes a combination of non-prescription medications, homeopathic remedies, and behavioral changes.

–          Decongestants: work to alleviate nasal congestion and can be taken orally or via nasal spray.

If you have experienced difficulty breathing through your nose or have an excessively runny nose when exercising, contact us! Enticare provides ENT and allergy services and we’re here to help.